Our Homeschool is "Play School" 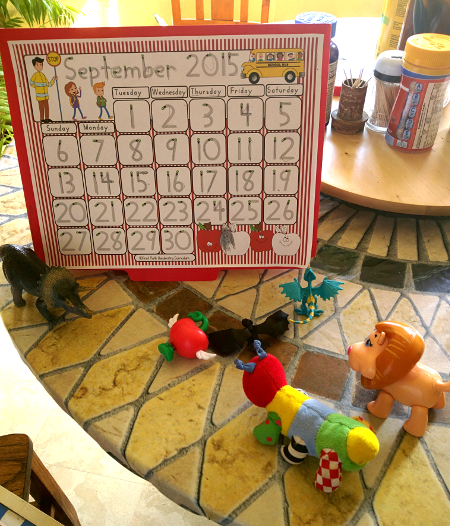 Before we had decided for sure that we would homeschool, back in the summer after his first year of kindergarten when we were still weighing options (homeschool, private school, repeating KG at his current school, etc), my son asked me if we could "play school."  We set up a little classroom in front of our magnet writer board, with a Stegasaurus for a teacher and various other toys for students.  The first time we played, he was the teacher, and some of the students.  I would have the students I was playing ask him questions, pretend to struggle with answers, and I would whisper the real answer into his ear if he struggled with answering them, or have another "student" suddenly remember the answer.

Gradually he let me be the teacher now and then, until eventually that was my role all the time (I played as a dinosaur, or other character of course--funny voices and all).  I generally made up the lessons off the top of my head.  We had a lot of "new students" and would spell their names on a magnet board we had that worked for our school's "chalk board."   We practiced adding and counting and a little geography and even a  little science (usually learning about the habitats the "students" lived in...like the elephant on the African Savana, or the snake who's home was in the jungle).  The "students" had pretend recess and snack and went home in the larger toy cars at the "end of the day."

It was a lot of fun...but not just fun.  I could see how my son was learning through this, and without the tears that often proceeded our daily Bob Book reading or workbook page I was doing to try an prevent "summer slide" (this was after a year where he had cried every day on the way to school, and made no progress).

But there were no tears over "play school"...in fact, he would ask to do it!

When we started officially homeschooling, we continued "playing school" too,  though at first the "regular" homeschool lessons were kept separate.  Then I discovered that lessons that he was resistant to tended to go smoothly and without objection when I just let the dinosaur teach them to her "class" (all the students, in reality, being my son).  If he pretended to be one of his toys when he read his Bob Book during play-school reading time there were usually no tears.  Pretty soon we were doing almost everything as part of play-school.

Half way through the year he started asking to "play homeschool" in stead.  That warmed my heart, though it didn't last (not enough "kids" in homeschool to have the interactions between the toys that he loved, so we went back to a "public school" style play school).

Playing school didn't ALWAYS work like it did when we started.  A year later, if he doesn't want to do something, just moving it to play school can't always fix it.   I know part of that is that he understands that "play school" is really just HOMESCHOOL, with some pretending mixed in.  And, I'll admit I'm sometimes less patient now with the "hi-jinks" of some of the "students" that interrupt lessons (they can be fun, but I can tell when he's just stalling).  And as much as I love imagination there are some lessons I need him to be present in, as himself, not playing pretend.  Other times I  just get burnt out on make believe. But it's still something he'll ask to do, even when we're on vacation from regular school (like our last month of summer).  That assures me this was still worth keeping as a regular part of our homeschool day.

I know eventually he'll grow out of this phase where he loves to pretend--but I'm going to enjoy "playing school" while it lasts.