My kids loved Legos for a long time, so lego themed parties became a regular thing at our house.   One of my favorites was the year we did a Ninjago party at the park (which sadly I didn't get a lot of good pictures of, but I still wanted to share it). 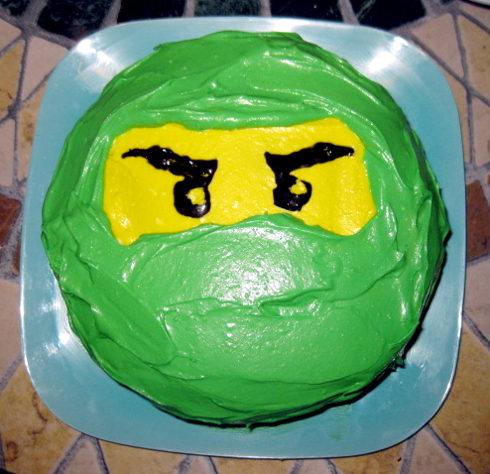 I did, at least get a good pic of the cake.   This was the 2nd time I'd done this cake...my son liked it so much the first time he asked for it again (only this time the Green Ninja, not the).  The eyes were a little tricky (I used black icing for that)...but the rest was pretty simple.   Just a buttercream with a LOT of green and yellow dye.   I did the eye area first and then spread the other.   The eye area you'll want to really get smooth, but the mask area can be messier and still look cool (in fact, it looks a little bit more like the folds in the mask that way).  It's a very forgiving cake design. 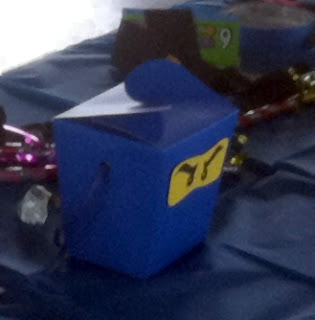 This section contain some affiliate links, through which I can earn commission.

The favors boxes were really cool too.  I made them with blue and red Chinese take-out boxes, and had bought Ninjago eye stickers to cut out and put on them, but then lost them somewhere in my house and ended up drawing eyes with sharpies on yellow paper to cut out and use instead.   Above is the ONLY one I could find a picture of, cropped from the background a larger picture  (why, oh why didn't I take picks of these!) 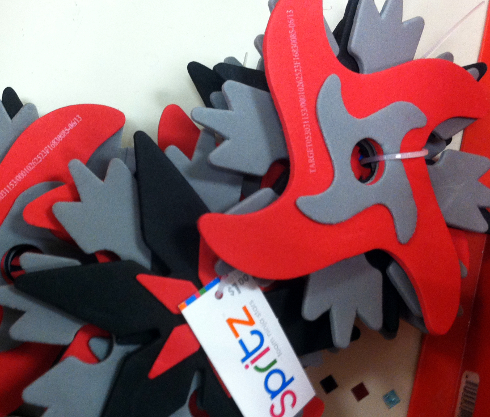 In the box were foam ninja stars and Ninago stickers.   Being foam I felt safe that kids wouldn't hurt anyone if they threw them at someone (which they did).
The ninja stars I got were from target, but I doubt they carry those anymore...so here's some similar ones I found online.


Click on the pictures to see these products on Amazon.

NINJA STAR THROWING
The first game we did was throwing the ninja stars from their favor box (which I gave everyone early), at a couple extra favor boxes.  Pretty simple and the kids liked it (and it gave them something to throw at other than each other).

SEARCH FOR THE GOLDEN WEAPONS
Following the ninja star throwing we had a scavenger hunt to find the Golden sword.   I hid cards around the park with different clues on where to find the next card.  At the end was a cheap plastic sword spray painted gold, and bags of candy for everyone.   They liked the candy but some were a bit disappointed about having to share the sword, so if I were doing this again I would have gotten enough cheap plastic weapons, and let them find one after every couple of cards, making this a search for the "golden weapons" in stead of just one weapon.

The rest of the time, after cake and presents, the kids just played at the park...which is what I love about having a birthday party at the park.  It makes things so simple.

Shared on...
Birthday Ideas for Boys
Throwback Thursday
Posted by Gale at 10:51 AM