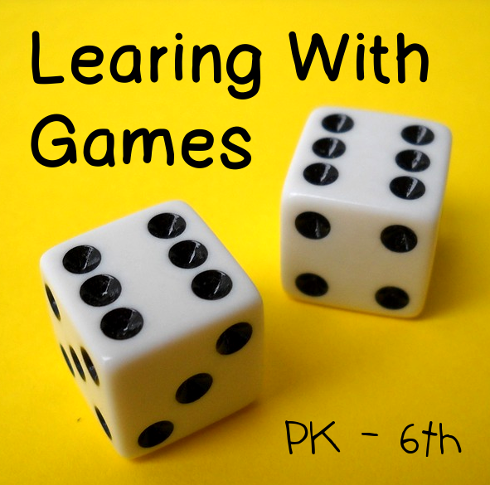 Playing games can be a great way to make learning fun, and spend quality family time together.   Below are a list of learning games you can use to practice and learn about various topics (for middle and high school games go here).   While there are many great online games too, in this list I'm only listing games you play offline with others (siblings, parents).

Some of of these games are meant to be played with other children the same age.  If a parent is playing, I suggest adding an element of chance  to the parent's turn to make it more fair (For example, the parent could have to guess what hand your child is holding something in to be able to play their turn, or if it is a quiz style game, or the children could answer all the answers and the parent only moves if they get the answer wrong).   If an older child is playing with a younger child in a game of skill, I suggest giving the younger child some sort of similar advantage (a head start in a race game, two turns for every one turn the other child plays, etc.).


Most of the items on this list are free, but there are a few board games (some of which may already be in your closet) or printable games you can purchase which I've include, which are marked with a $.

*Why do I even bother including MS/HS on an elementary school list?   Because sometimes its nice to find a game you can play with the whole family that everyone can learn from.   If you're looking for more games for Middle and High School, check out Ellen McHenry's Basement.

Subsidizing (Ability to quickly tell how many of an object there is)
Caterpillar Number Match (Printable, PK/KG)

French
On Vacation Around the World (in French) (Printable, E 7+/MS)

History
Some of these are game from historical time periods, and others are games that teach about these time periods.