A Day Full of Emotions

What an emotional day.  Good emotions, some bad ones...some very mixed ones.

Today started with me having to get a ride to co-op because my car wouldn't start.  It was a new member who lived near me who drove us, and I really enjoyed getting to know her and her family on the way.  Thoroughly enjoyable conversation.

Today was the last day of a class I was teaching on ships and the sea today.  I used to live on a boat so it was a natural fit for me.   Today we were talking about sea life and I had all sorts of shells and even a whales tooth for the kids to look at, in addition to the array of library books I always bring for pictures.     It went GREAT!   The kids were really into it, asking all sorts of questions, and sharing what they knew.  They loved the experiment on blubber and buoyancy we did.  So happy about how it went, relieved to not have any more classes, and yet a little sad not to be continuing this.

So, after school I thought I had plenty of time to find someone to jump our car and get our battery checked out...but then realized we were going to a play with another group of homeschoolers tonight (I had mixed up the dates)! So, I scrambled to find neighbor who could jump the car,  and then took it to our mechanic to check the battery just to be sure (because even though I know I could drive it around and charge it, I've had too many time when after a battery died that it went out again soon afterwards anyways).  While sitting in their lobby I checked facebook, and a update popped up saying "You have memories today with your mom."  I clicked...usually it's something trivial, a picture of a cat or craft she shared.  Today, it was something for "National Daughter's Day" talking about how much I meant to her and how proud she was.  Tears came to my eyes.  My mom passed away several years ago.   And there she was, still telling me how much she loved me on facebook.  I had to step outside a bit, let a few tears fall unhindered before I pulled myself together and went back inside.

On our way home I stopped to get something in Walmart and in the supermarket isle a couple noticed my "I may live in Texas, but I'll always be a California girl t-shirt" and told me they were from California too (and that she had the sweatshirt version of my t-shirt at home.")  We talked for a long time (well, for a supermarket conversation) about what it was like being Californians in Texas.  It was so great talking with some other Californians...they moved here two years ago, and I moved here nearly 20 years ago, but our experiences were so similar.

Then, I went home, got the kids ready and left for the play:  Fiddler on the Roof.   This was another flashback, since the last time I had been was in high school, when our school did the same play.  Of course this one was more professional...with amazing props and a real orchestra pit.  But it was also a college play, and a dress rehearsal (they let our homeschool group come then for less)....so there was a few missed notes.  Still, the acting and singing overall was wonderful.  And so many things hit me deeper this time around.  While I had thought the "Sunrise, Sunset" song a little dull the first time, this time, with my youngest curled up on my lap and my older two sitting beside me, when they sang "Where is the little girl I carried...where is the little boy at play?" it made me teary (again...I think my mom being fresh on my mind was part of it).   The struggles Tevya went through about his children also I think seemed more fresh.   But I saw more hope in the ending than I had the last time...how they were leaving, but would carry on, and the beckoning the fiddler to come with.  Really, the first time I don't think I understood the symbolism behind the fiddler, precariously making music on the roof, at all...but now it came in loud and clear. 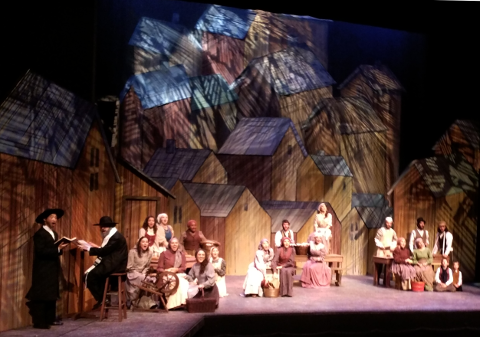 What a day.  What a cathartic, beautiful, emotional day.
Posted by Gale at 5:31 PM

Email ThisBlogThis!Share to TwitterShare to FacebookShare to Pinterest
Labels: About Us