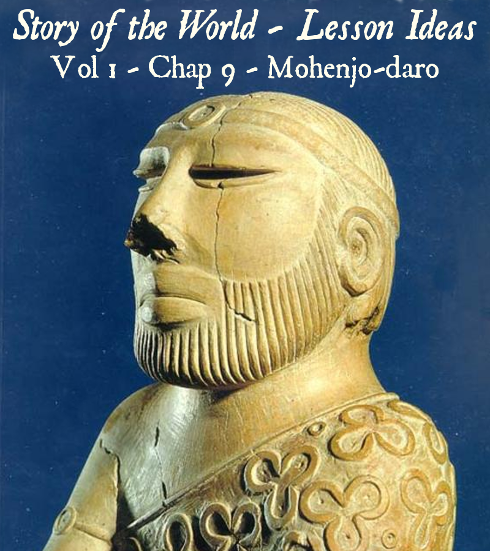 The Mojenjo-Daro artifact photo above  is licensed by World66 under the
Creative CommonsAttribution-Share Alike 1.0 Generic license

Post contains some affiliate links, through which I can earn commission.
I suggest looking for the books mentioned at your local library.


Below is our lesson on the Indus Valley civilization of Mojenjo- Dar for Story of the World (Vol 1 Chap 9)...along with some additional resources.  This was a fun section on a period of history that is important, but often overlooked.

The first section is on the Indus Valley Civilization.  There are a couple of neat videos out there showing mock-ups of Mohenjo-daro...I choose one of them to show BEFORE reading this chapter. I thought the chapter would be more interesting if my son could SEE the place where this takes place before he read about it. I also showed him some artifacts from the Indus River Valley civilization from DK Eyewitness Books India*. And I think it worked, because he listened very attentively to this section.

I actually found some much better pictures of Mojenjo Daro in a general "Ancient Civilization" book at our  library later (doh!)....

The Kingfisher Book of the Ancient World


I love love the beautiful illustrations in this book...and WISH I had found it before doing this chapter.  It has become one of my favorite books for supplementing story of the world (the writing is well done too, though since we are using SOTW we didn't read a lot of it, just mostly looked at the pictures)

This is the book we actually used, but it's illustrations of the Indus Valley Civilization was a little lacking.  The "Look Inside" preview on Amazon actually includes the pages we looked at (Page 8-9...click link above) if you want to see.  All of the pictures on those pages were Indus Valley artifacts EXCEPT the painting in the lower right corner that shows the Aryan people, who came later.


PART 2 - The Hunter and the Quail

The second section is a folk tale about a Hunter and a Quail.  You could do these two sections on different days, though I thought the historical info and the story flow together more than in some other chapters with folk tales, so we did read this on the same day.  We took a snack break between the first part and the story though.

Recently in a free sample Unit by Glimmercat* on the Indus Valley I found this neat cut out illustration that you could use in a hands on way with the story.   Originally though we used  a picture of some Indian Rock Quail which I showed my son at the beginning of the story, and another picture which actually illustrated this tale which I showed him later.    You could also illustrate with a video I found, that tells this same tale in another language. You could turn the sound down and just tell the story over it (though it has some differences: the hunter doesn't throw the net on the quail, he lays seeds on it to catch them, and the ending part where the quail don't work together isn't clearly shown). You'ld want to practice it while the kids aren't looking first, if you tried this.

(Side note on the Glimmercat Unit...It has some other cool activities, but  I would save the "mandala" activity for Chap 30 on ancient Hinduism, since it has ties to Hinduism.  An image of a mandala  and use of the term first appear in India via the Hindu text known as the Rig Veda c. 1500 - c. 500 BCE.)

At home for our activity we played the Professor Indus Game on the BBC website. He liked some of it, but some of the game was really repetitive and we ended before it finished.

At co-op, a teen member made a minecraft simulation of Mojenjo Daro which all the kids added to.  They had a lot of fun with that.

I also found a great hands-on Mojenjo-Daro model activity on the blog Satori Smiles (and she gave me permission to share a picture with you all).. 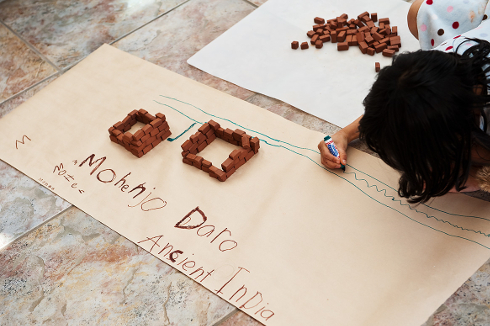 We didn't do this since we were already covering this lesson in co-op, but I can see where this would be a fun activity.    There's some prep involved but those little bricks could be kept and used in other lessons too.  Lots of mud brick structures in the ancient world you can recreate.

We also read another Indian fable, Once A Mouse, a story of a mouse that was turned into various animals to save him from being eaten, but forgot to be grateful.  My son really enjoyed this one...he even asked to read it again several times before we had to take it back to the library!

Crash Course World History Video (9.35 min)
This video is fun, fast paced, and full cartoonish illustrations...but as it's for adults too also has some bigger vocabulary that's not explained.   The beginning part goes over what makes a civilization, before they get to the Indus Valley part, but there's also a shortened version without that part or the very end (which doesn't directly pertain either).

Indus Valley Civilization Website
This website has info, pictures, videos and some interactive content.  I was not able to get the videos to work on my linux computer.

Story of the Quail Video (not in English)
You could turn the sound down and tell the story on top of it....though it has some differences (the hunter doesn't throw the net on the quail, he lays it out, and the ending part where the quail don't work together isn't shown well).


Last Lesson :: Next Lesson
More Story of the World Resources