The following is a collection of activities we did, and videos we watched, during our study of history (so if you've been following my Story of the World series, you've seen some of these activities before).   I'm collecting them here for those wanting to do a separate Unit Study of Africa.

Egypt of course is part of Africa, but since you could do a whole unit study just on Egypt (and there are many excellent ones to be found online), I'm not including many activities specifically about Egypt here, but you can find many activities we did related to Egypt here.

Africa is a continent with various cultures, landscapes, and 54 different countries. 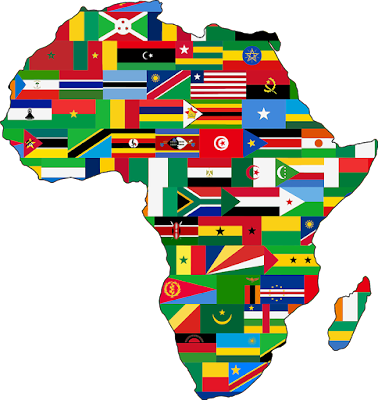 This short video gives kids an idea about how wonderfully diverse this continent is.

Children Just Like Me is a wonderful books that features modern children from different countries around the world, including many from Africa.

I would read about these children, maybe over several days if you have kids with short attention spans, and look up the country they are from on a map afterwards.   (This book is also available free online through Open Library)

You could also see if there are any 365 degree online virtual tours in on the World Map at Round Me in the country that the children are from.    I suggest letting kids explore  the other "blue dots" in Africa in this site as well, as many as they would like to explore. 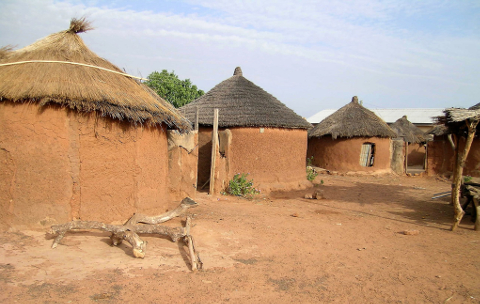 When I taught about Africa in our homeschool co-op, we were learning about African history, so I decided to have the kids make a traditional round house model, a traditional style of house which can be found in many areas of Africa.

Before we started the craft, though, I wanted to show the kids some examples of other types of buildings people in Africa live in.   Because while people do live in houses like that in parts of Africa, even today, they also live in cities like this.... 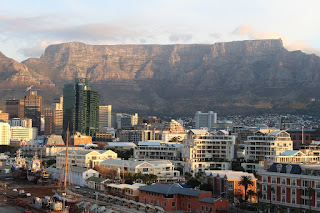 So I filled up this pinterest page not just with the traditional grass roofed round-houses, but  modern houses and other interesting buildings in various African countries (and a few landscapes just for fun).    I'm so glad I did.  The kids were fascinated by the variety of houses I showed them--they really loved seeing the different styles.  I'm really glad we did this because a few of the kids were really surprised to learn that African cities had skyscrapers.  Worldviews were expanded, and that made my day. 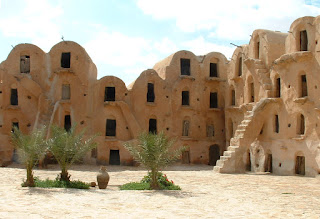 
I found out something pretty cool while browsing those building pics on Pinterest.  The buildings above are from a town in the middle of the Sahara called Tataouine...and yes, if that sounds a lot like Tatooine, the Star Wars planet, it's because it's name and style of buildings did inspire Tatooine in the original Star Wars Series. George Lucas didn't do any filming there but did film some scenes in another nearby Tunisian town.

So, sorry I don't have pictures to share of the hut, but it's pretty simple.   For a small solid house, just roll the clay on a flat surface until you have a round tube a little bigger than a quarter.   Cut the tube down so it's not too high.   Shape the top into a cone and top with dried grass for the roof.   Use a small tool like a toothpick or chopsticks to embed a "door" into the hut.

I tweaked this activity found in this book with activities related to Africa, which has many more great African activities.

This book, which you can view for free at Open Library, has lots of fun African crafts and information about the countries and areas of Africa where they originate.   It would be fun to go through the book, pick a craft to do, and look up the country it's from on a map.

Folk tales are a great way to learn about an area's culture.  Your best bet for finding great African Folk tales to read is just to sit yourself down in your local library in their folk tale/fairy tale section, and find the section with African books (there often is one).   But, I do have a few suggestions.

east, a children's book we found in our local library (you can also find it free online through Open Library).  It has charming pictures with African cultural details.  If I had more time, I think I would have tried to cook some of the traditional food mentioned in the story for an extra activity.

This book is available free online through Open Library.    If you would like to read more Ananse stories, there's a good chance you will be able to find some more at your library. Searching for these folk tales can be a bit tricky, though, because there are various spellings of the African names involved ("Ananse" is often also spelled Anansi, and some versions of these tales just call him "Spider.")

This book has favorite stories from some of the children featured in the original Children Just Like Me (the one published in 2005).   Two of those stories are from Africa, one from Botswana and one from Morocco.   The stories are short and the illustrations are beautiful.  (Sadly, I couldn't find this one on Open Library, but I suggest it as it makes a great pairing with Children just like me. ).

SECTION 3:   History of Africa
This isn't a complete history of Africa, but just a sampling from ancient history to about the 1700s.   While again, this does not include a history of ancient Egypt, I suggest finding a good book on or Egypt to fill this out if Egypt hasn't already been covered in your history curriculum.

Lost Kingdoms of Africa: Nubia is a great documentary, and while it's not specifically aimed at kids, my son who was 7 at the time we watched this enjoyed it quite a bit (though I skipped over some parts).

I went ahead and charted out the minutes for your convenience below, to help you decide what parts to use and good stopping points if you break this up in sections, or want to watch only part of it.   However, the video I had used was taken down and I had to find another one, so this might be slightly off.

I find younger children really enjoy the first part about the Rock Gong and Rock Art, but are less interested in other parts.

The following activities would be a good follow up to this video.

This rock art would fit in nicely after learning about the rock art in the Sahara.   Before doing this activity I suggest looking at some examples of Saharan rock art here.

First, I collected rocks to paint on.   Because of time we just used regular paint in natural color (ancient rock art is often in shades of black, red, and browns).   But if you have time you can also make your own paint using minerals or gathered material, which would be really fun.  For older kids, this article has more about prehistoric paints, and they have some links toward the bottom to paint-making activities that look more at the chemistry of making paints.

Here's our rock art.   Our son really enjoyed this. 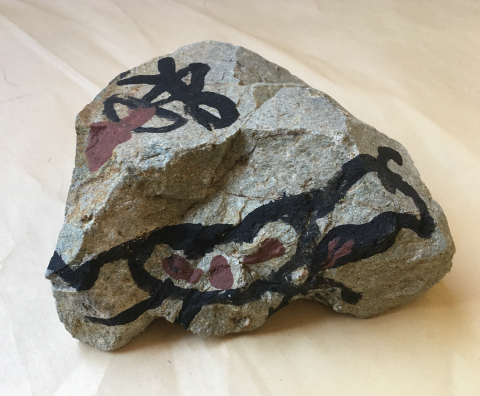 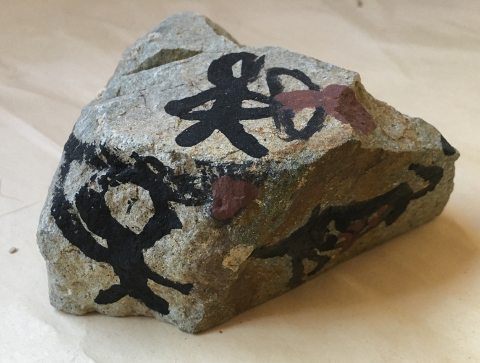 The rock art craft pictured was actually from a craft we did while studying the Lascaux caves in France and Native American rock art in California, but when I saw the Saharan rock art I thought this activity would work well here as well. 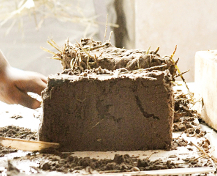 The Kerma Duffafa was a huge structure made of mud bricks.   They most likely made them similarly to how the Egyptians did.   You can learn how to make mud bricks with your kids here. (Requires woo, mud from your back yard, and optional grass).

Ancient Egyptians and Their Neighbors
If you want your children to learn more about ancient Nubia and do some crafts or activities related to it, this is the best book I've found with activities on the subject for children.  It  has a whole section on Nubia as well as sections on the Hittites, Mesopotamians, and Egyptians (a small section on the Nubian pharaohs is, if I remember right, in the section on Egypt).  The only thing I dislike about this book is that it's entirely in black and white (save for the cover).  Sadly this book is not available on Open Library.

MANSA MUSA AND THE EMPIRE OF MALI

VIDEO:  Mansa Musa - by TedEd (3.54 minutes)
A good short animated video about Mansa Musa, possibly the richest man who every lived, and his famous pilgrimage.   I would watch this or the next video on Mali (which includes the story of Mansa Musa), but you wouldn't need to watch both.

VIDEO SERIES:  The Empire of Mali - by Extra Credits (Web Series)
This animated web series covers not just Mansa Musa, but the Kingdom of Mali.  It has 10 videos, each about 8-10 minutes long.  I liked how this put Mansa Musa in context, and spoke more of the great civilization of Mali.   (Contains some historical violence - preview before showing younger children).


QUEEEN NZINGA AND THE MATAMBA KINGDOMS

VIDEO:  Queen Nzinga Part I  and Part II by Extra Credits
Queen Nzinga was a 17th-century queen of the Ndongo and Matamba Kingdoms in what is today known as Angola, who fought for the freedom of her people from the Portuguese.  (Contains  historical violence - preview before showing younger children).

Shaka by Diane Stanley
A beautifully illustrated and well written children's book about the story of Shaka.   The pictures are engaging very child friendly, though it does have descriptions of violence, so preview before reading to younger children.    This book is also available for free on Open Library.